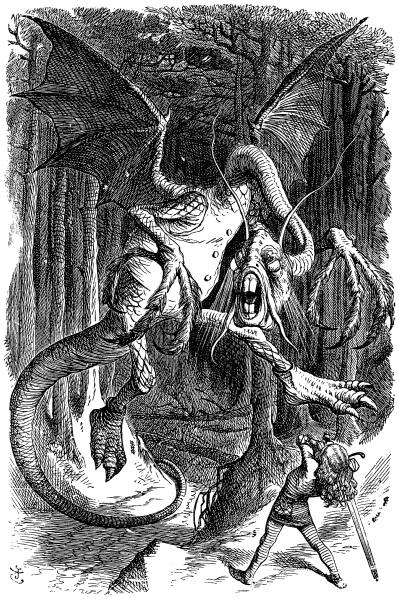 I know, two Interesting Literature posts in one week.

What can I say? This blog is just so much better than mine!

So beware jaws that bite and the claws the clutch – and if you’d like to recite, hereyago –

‘Twas brillig, and the slithy toves
Did gyre and gimble in the wabe:
All mimsy were the borogoves,
And the mome raths outgrabe.

‘Beware the Jabberwock, my son!
The jaws that bite, the claws that catch!
Beware the Jubjub bird, and shun
The frumious Bandersnatch!’

He took his vorpal sword in hand:
Long time the manxome foe he sought —
So rested he by the Tumtum tree,
And stood a while in thought.

And, as in uffish thought he stood,
The Jabberwock, with eyes of flame,
Came whiffling through the tulgey wood,
And burbled as it came!

One two! One two! And through and through
The vorpal blade went snicker-snack!
He left it dead, and with its head
He went galumphing back.

‘And hast thou slain the Jabberwock?
Come to my arms, my beamish boy!
Oh frabjous day! Callooh! Callay!’
He chortled in his joy.

‘Twas brillig, and the slithy toves
Did gyre and gimble in the wabe:
All mimsy were the borogoves,
And the mome raths outgrabe

1. The poem ‘Jabberwocky’ gave us a number of new words which are now in pretty common use. The most famous of these is ‘chortle’, a kind of laugh that is a blend of a ‘chuckle’ and a ‘snort’. But the poem – which was written, of course, by Lewis Carroll – also gave us the word ‘galumph’ (to walk clumsily and noisily) and ‘slithy’, in the sense of ‘lithe and slimy’. ‘Jabberwocky’ may also have influenced our modern use of the word ‘mimsy’, though this remains difficult to determine (‘mimsy’ already existed with a similar meaning, though Carroll’s poem probably helped to popularise it).

Thank you for your comments - I appreciate it! Cancel reply

The Life of the Literary by JL Metcalf

A page about stuff and things that is also full of stuff and even more things.

BY GRACE THROUGH FAITH

Read our Mission. Find out how you can help us adopt James.

Humor, Sarcasm, Screaming and Other Handy Tools for Surviving the Teen Years